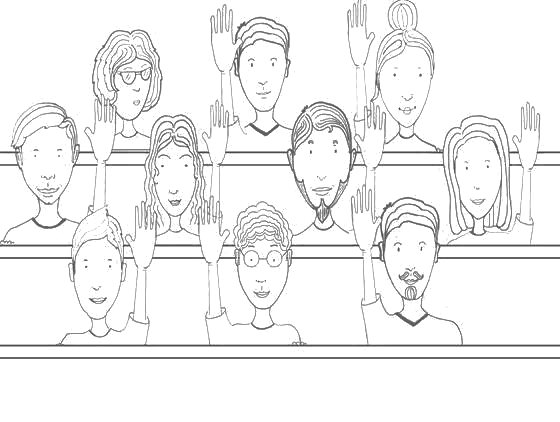 We were invited for the first ever TEDx – Q&A session for VJTI engineering students and makers, on 17th September 2014 at the VJTI campus (VJTI is one of the premier engineering institutes of India having received funding from The World Bank). A big thanks to TEDxGateway’s campus connect initiative. What an awesome time we had answering questions from curious minds at VJTI about Bleep, its future, human behaviour, behaviour change, Behavioural Design and the role of technology in Behavioural Design.

Students of VJTI were shown our TEDxGateway talk on Bleep and Behavioural Design immediately followed by a Q&A session that seemed like it would have lasted hours because the questions just wouldn’t stop from the enthusiastic crowd. But of course we had to have a maximum time limit of an hour. Here are highlights of the Q&A session.

Questions naturally began about Bleep and its future. We explained to students that Bleep being a product that solved a social issue and not an individual problem, is the responsibility of the Government of India. Which is why we aren’t selling Bleep to individual customers who we believe will hardly form any numbers. Plus Bleep won’t help car manufacturers sell more cars so they won’t install it voluntarily either. After some question and answers most seemed to accept our answer but some still seemed optimistic that Bleep could be sold to individuals. May be it was their optimism bias. May be one day we’ll be proved wrong.

Students asked whether Bleep could prove to be distracting and cause accidents in emergencies. We informed them that we had tested Bleep for over 3800 km and no accidents had occurred. We also told them that according to Jeff Muttart’s study (a traffic-accident reconstructionist) in emergencies people don’t use the horn and therefore Bleep will not go off and distract them further. Jeff Muttart has pored over hundreds of surveillance videos of real-life car crashes and near-crashes. His study shows that emergency horn use is not associated with decreased accident involvement. He found that drivers never steered and honked at the same time, and usually they didn’t honk at all. About half of emergency honks were meant to chastise and came only after the danger was over. The other half were just preludes to a crash. “It really didn’t serve any purpose at all. It was just, Hey, by the way, I’m going to hit you.”

Someone asked “But what will happen to people’s honking behaviour once Bleep is removed from the car?” We told them that we haven’t done the post study, but we jokingly said, “First let Bleep come into our cars. Then we’ll see what happens if its not there anymore.”

The most interesting part of the session was the discussion about Behavioural Design and behaviour change. We sensed that the students found it to be a new, unique and intriguing concept. We spoke about irrational behaviour, difference in attitudes and behaviour, why we cannot solely rely on will power for behaviour change, why most educational campaigns don’t work, how we create false memories, why we use Behavioural Design and not work towards increasing people’s self-awareness and how collaboration between engineers and designers can design new products that facilitate behaviour change.

One of the curious students having read about People Power (click on the link to read about it) before attending the session, asked us to speak about the experiment. So we obliged and told them about how human behaviour is contagious. Like right there in the auditorium once the first student raised his hand to ask a question, seeing him one by one the others followed. Soon we were asked if we had solutions for littering, spitting, eve teasing, not talking on the mobile while driving and so on. May be one day we may.

Meanwhile we told them that we had a solution for another behaviour change. We spontaneously made an offer to VJTI students and makers that we’d be happy to hire a person who could help us create a product on a project that could potentially change an aspect of our behaviour. If you are an electronic engineer, maker and are interested to change human behaviour, email us with your work at anand@brief-case.co