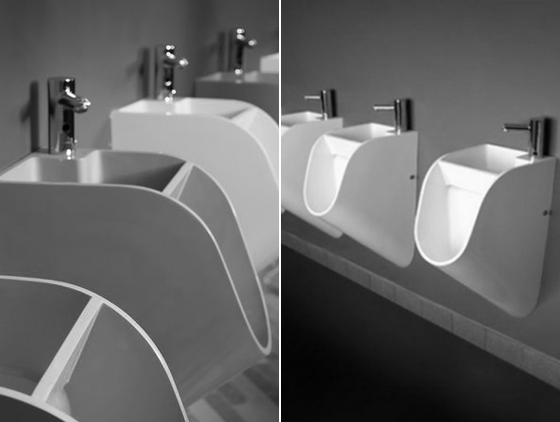 A study by Carl P. Borchgrevink, an associate professor at Michigan State University found that only half used soap and 15 percent didn’t wash their hands at all after using the toilet. This study was done in US. Imagine the situation in countries like India! Another study found that compliance rates for hand washing in American hospitals amongst doctors and nurses are only around 40 percent, and years of awareness programs urging doctors to wash up or use disinfectant gels have had little effect.

Not surprising. Men are inherently lazy and forgetful. Washing hands with soap takes more effort than doing nothing. Leave alone the time duration required for washing hands with soap for it to be effective. And the act of peeing is so easy for men that it may not register as a way of spreading germs.

But here’s a solution that’s likely to get men to wash their hands after relieving themselves. A designer named Kaspars Jursons from Latvia, has come up with a simple and beautiful Behavioural Design called ‘Stand’ that’s a sink cum urinal. Men can relieve themselves and wash hands conveniently standing right there, save water by not requiring to flush separately, save time by not heading to the basin which in many restrooms is on the other side and save more time by not waiting in queue to use the wash basin. It also saves space. The tap is hands-free activated by sensors, so there’s no effort required there as well. A built-in soap dispenser also activated by a sensor would make the design complete.

Is it a little too close for comfort? Well we’d prefer to shake hands with men with clean hands.