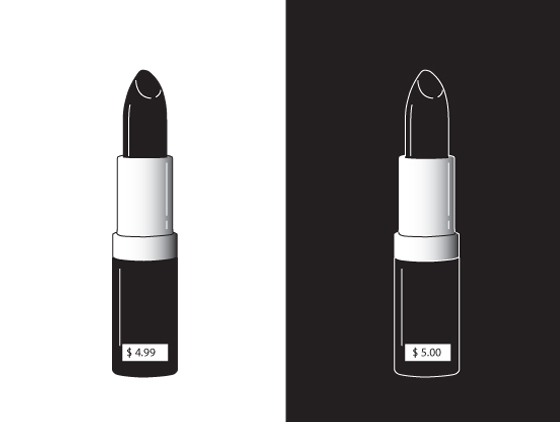 Even though you know on a conscious level that there is no important difference between those two numbers, our perception of them is radically different because our brain is not very good at equating those digits with a real world quantity. One study suggests it’s because our brain is reading the price like it reads everything else: left to right. It puts a higher value on the first thing we see so no matter what comes after that, we still wind up relating it to the first digit. No matter how much you tell yourself otherwise, Rs.499 still registers as “in the Rs.400 range” rather than “essentially Rs.500.” Or $4.99 still registers in the 4 range than 5.

In one of the most telling experiments, Rutgers University professor Dr. Robert Schindler and his colleagues did a real-life test with a women’s clothing catalog few years ago. The clothing line normally advertised items ending in 99 cents. For the experiment, the researchers divided the 90,000 customers into three groups. One group got catalogs with the traditional prices, one got prices ending in .00 and one got prices ending in .99. The 99-cent catalog significantly outperformed the .00 one, Dr. Schindler said, recording 8 percent higher sales even though the average price decrease was only three-hundredths of a percent.

A 99-cent ending “makes the price ‘feel’ less,” Dr. Schindler said, “and it goes deeper than just appearances. If you give people two ads for a blouse, one priced at $22 and one at $21.99, people are more likely to judge the $21.99 item as being on sale. “And there’s an emotional kick to getting a discount that makes a difference to consumers.”

Retailers also look at 99-cent pricing from the opposite direction, said Britt Beemer, chairman of America’s Research Group, which interviews up to 15,000 people a week to gauge consumer behavior and marketing techniques. “Let’s say your item is $49.99 vs. $49,” Mr. Beemer said.

“There is no perceived difference for most consumers between the two. The consumer looks at the dollar number and forgets the right-hand digits.” From the seller’s standpoint, then, the $49.99 price can yield them almost one extra dollar for each item, with no perceived difference in the price on the part of the buyer. Pretty handy for the US economy, I must say.

Having said that I think that premium retailers and brands, that don’t wish to be associated as a discount label, should have their prices end in round numbers because that will perhaps speak of ‘quality’ more than ‘discount’. What do you think?