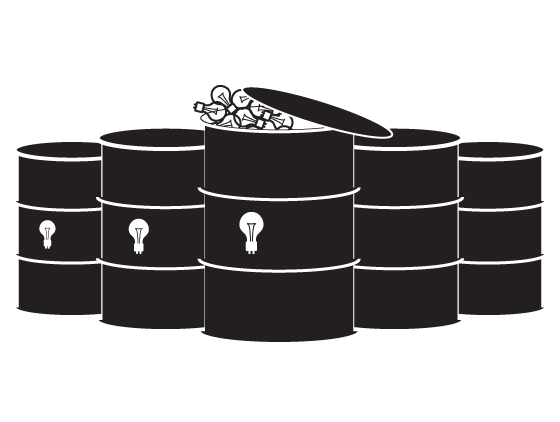 Most of us tend to think that innovators are born geniuses. It’s in their blood. Either you have it or you don’t. But reality is anything but that. Innovation like anything else is a habit that can be designed. Just the way a company called Brasilata has done.

Brasilata is a US$ 170 million manufacturing firm from Brazil that makes various kinds of steel cans. Manufacturing may seem boring but Brasilata is one of the most innovating companies in Latin America. For example in 2012, employees submitted 1,71,916 ideas – an average of 170.4 ideas per employee! Many of the suggestions led to the development of new products. The decision regarding approval and implementation of these ideas is made most of the time by the front line.

For instance, Brasilata came up with a new approach for steel cans designed to carry flammable liquids to meet UN standards. These cans needed to withstand a drop from 4 feet. Most manufacturers did this by thickening the metal layers, which ended up using more raw material. But Brasilata’s employees created a new steel can inspired by car bumpers that collapse on impact. The new steel can be deformed on impact, reducing stress on critical seam. This also reduced the amount of steel used.

In another instance, when the Brazil government rationed energy in 2001 due to severe energy crisis, Brasilata’s employees reduced its energy consumption by 35% and even resold extra energy saved to other companies.

Innovation is so embedded in the employees that two employees came up with a suggestion of eliminating their own jobs! Beat that.

Is innovation in their blood? Are they born with it or has been it designed?

Let’s see what their founders put in place for this to happen. To begin with the employees are called ‘inventors’. It isn’t simply feel good language. When they join the company they are asked to sign an innovation contract. It challenges them to come up with ideas for better products, improve production processes and squeeze costs out of the system. Procedures have been made for them to submit their ideas. Brasilata distributes 15% of its net profits amongst its inventors.

I have no doubt that the journey would have been a difficult one. It probably took a while for employees to become good at inventing. And initially employees might have even felt like imposters with themselves being called inventors. The founders would have created an expectation of failure – not the failure of the mission, but of failure on route.

And yes I forgot to mention that the idea of the two employees of eliminating their job was accepted. Their explanation was that they had eliminated their job positions to increase company profitability and this would in turn be distributed to all; as mentioned previously 15% of Brasilata net profits are shared by the employees. But the two were placed in a new roles because Brasilata has a no dismissal policy. In the opinion of the chief executive officer “job security functions as a safety net which enables the trapeze artist to perform to his best ability without risking his life.”