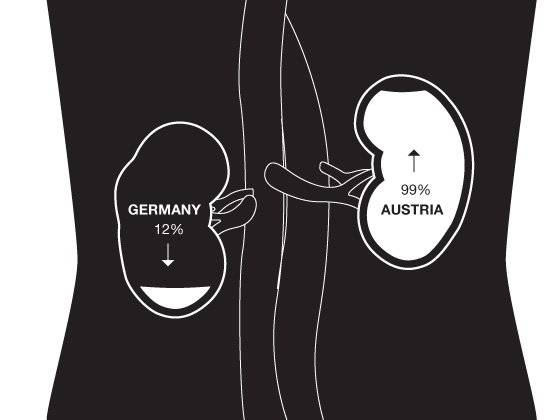 To get a sense of the power of the default rule, consider the difference in organ donation rates between two similar European countries, Germany and Austria. In Germany, which uses an opt-in system, only 12% of citizens gave consent, whereas in Austria which uses an opt-out system, nearly everyone (99%) did.

Of course a successful organ donation program needs the infrastructure of the medical system in matching donors with recipients, transporting organs and performing successful transplants. But keeping everything constant, default option still plays a major role in increasing the donation rate.

In some countries like France, though the default rule is to be a donor, doctors still ask the family members for permission. Even then the default rule matters. As Childress and Liverman put it, “The next of kin can be approached quite differently when the decedent’s silence is presumed to indicate a decision to donate, rather than when it is presumed to indicate a decision not to donate.”

How many of you have changed the default settings of your mobiles? This power can be harnessed to change behaviour. Setting default options can have huge effects on the outcomes, from increasing organ donations to increasing personal savings to making better investments. Never under-estimate the power of inertia.