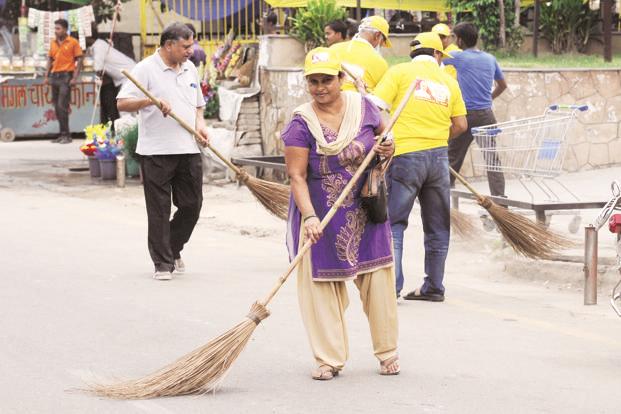 A couple of weeks back, a video made by a private organization promoting the Swachh Bharat Abhiyan, featuring Kangana Ranaut and other Bollywood actors, went viral. The video depicted the picture of goddess Lakshmi disappearing from photo frames when people indulged in littering. The narrator on the video was Amitabh Bachchan, who said that the goddess of wealth lives only where there’s cleanliness. It ended with a plea by Bachchan and Ranaut to keep the country clean by not littering. Though the government didn’t issue this particular video, it has issued other, similar ad campaigns in public interest that promote the use of a public toilet instead of open defecation.

It is largely believed that ad campaigns change public behaviour by creating a change in people’s mindsets, which in turn leads people to take the desired action. But changing behaviour is not so easy. There are too many assumptions for this model of awareness leading to action.

This is not the first time that the government has used ad campaigns to try and change public behaviour. In the recent past, campaigns like Save Fuel, Save Money have been aimed at changing driver behaviour by asking them to switch off car engines at traffic junctions to save fuel. Do you remember the campaign? If you don’t, crores of rupees in the form of advertising have been wasted. But let’s assume you are one of the few who do recall this message. Has it changed your behaviour? Do you now switch off your car’s engine at traffic signals?

Most people don’t. It’s a lot of effort. You need to turn the ignition off every time you wait at a traffic signal. And when the signal turns green, you have to turn the ignition on, listen to frantic honking because you haven’t moved immediately, change the gear from neutral to first if you are driving a manual-gear car, get frantically honked at again, put the hand-brake down, and finally get moving. Even for people who are highly cost-conscious or environmentally conscious, it’s too much effort.

That’s why campaigns are a money-draining and time-consuming way of attempting to change behaviour. In the UK, for example, in the 1970s and 1980s, the government spent millions on TV, radio and billboard ads educating people to wear seat belts. Researchers F.M. Streff and E.S. Geller estimated that by the end of the 1980s, 80-90% of British people had seen these ads eight-nine times each.

One would assume that showing people being launched head-first through their windscreens would make people respond. But it turned out that most people weren’t wearing seat belts. It was when the law changed in 1983, along with strict policing, that most people started wearing them.

Behavioural science suggests that a lot of the messaging on educating people to change behaviour seems powerful and emotional in the spur of the moment, but eventually doesn’t change behaviour because mere awareness rarely leads to action.

Changing behaviour is tough. People don’t always behave in the desired way. People should be exercising regularly, but many don’t. People shouldn’t be overeating, yet many do. The traditional way to change behaviour is to make people aware of the pros and cons of a particular act. But this method is ineffective, because most behaviour is instinctive i.e. subconscious. We aren’t always aware of the reasons for our actions. It takes a lot of time, effort and money to make someone aware of their behaviour, convince them that change is necessary and motivate them to change.

For example, to reduce honking, we conducted an experiment in which a red button called Bleep was fitted on to the dashboard of the car. When the driver pressed the horn, the red button would begin to beep and flash. In order to switch it off, the driver needed to press the button.

The button made the driver conscious of the habit of honking by giving him immediate feedback in order to reduce indiscriminate honking. In a six-month experiment, Bleep reduced honking by 61% on average.

Similarly, a nudge was used in Copenhagen, with green footprints painted on the ground, pointing the way to the nearest garbage bin, that reduced littering by 46% by painting.

Meanwhile, to keep India clean, we first need dustbins that are easily accessible and cannot be stolen. They could be designed to include that extra bit of motivation for use—for instance, by having two sections and a question such as: “Who’s your favourite actress: Kangana or Deepika?”.